skip to main | skip to sidebar

via Gristmill, I read this report put out by Carbon Equity last week, and it basically scared the piss right out of me. More than anything, the first section is a terrifying summary of the latest science of climate change, including some of James Hansen's work as recent as last December. Specifically, they point out something that should be clear by now, especially to Canadians: the effects we're seeing today, not 50 years from now but today, mean that the current concentration of CO2 in the atmosphere is already "dangerous climate change". Basically, scientists didn't have good models for a lot of processes -- most especially ice sheet breakup -- and so they assumed that processes would occur in a roughly linear fashion. Or rather, the IPCC process wouldn't accept non-linear models, due to lack of consensus, so the public debate among policymakers assumed, for example, that we had decades before we needed to worry about an ice-free arctic. Instead, we've seen a non-linear collapse of ice in the arctic, driven by albedo-flipping and moulin-tunneling. I showed this picture once before: 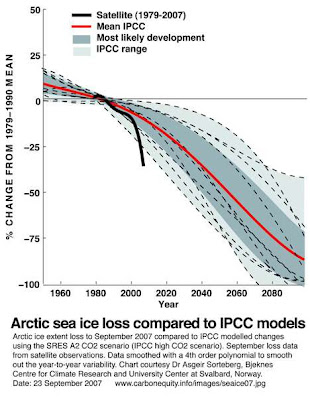 And what's noteworthy there is not just the fact that sea ice loss is way outside the predictions, but how quickly it's turned.

Or, we could just go with historical data: the last time CO2 concentrations in Earth's atmosphere were as high as they are today, it was 3 million years ago, sea levels were 25 meters higher, and birch forests grew in Antarctica while a small number of austrolopithecines experimented with a radical new idea -- walking on two legs. The idea that human civilization has ever faced a climate change like the one that's in the pipeline is simply false.

If nothing else, the sea level rise implied in our current CO2 concentration means we need to stop emitting carbon, now, and we need to rapidly draw carbon out of the atmosphere by any means necessary. James Hansen, who has been a geoengineering skeptic, now seems to be arguing that a limited amount of sulphate injection may be the only way to stop the total collapse of the Greenland ice sheet.

But probably the most valuable thing to take away from Hansen's work, and that of Carbon Equity, is that time is of the essence. Too many people, I believe, think that solving the climate crisis will be easier in the future -- because of new technologies, better understanding, or generally more wealth. I believe this misunderstanding will, if it continues, doom most of the planet to a hungry death. Even people who understand what the phrase "tipping points" means don't actually seem to have internalized it: at a certain point, it will be beyond our capacities to control climate change. You can talk about space mirrors lowering insolation or whatever other magical ability that free-market pixie dust will grant us, but the reality is once we pass that threshold, there's no going back. Seeing as we don't know where the point of no return is, but we do know we're approaching it at speed, the only sane course is to stop and turn around.

We've already warmed the Earth 0.8 degrees celsius. There's another guaranteed 0.6 in the pipe, meaning that if we eliminated CO2 emissions tomorrow, we're still going to see 1.4 degrees of warming relative to pre-industrial times. James Hansen esimates the "point of no return" at 1.7 degrees. If the melting of the arctic isn't arrested and reversed, we could see as much as a 0.3 degree warming from the albedo effect. And, it's possible that already-thawing permafrost will add more than another 0.3 degrees. Add it all up and it means that if James Hansen is right (and he's got an excellent track record) we need to stop CO2 emissions, now, because if we push it any further we will be well and truly over the cliff. And we may be already.

But of course, this isn't realistic. Cars, coal, and concrete in China alone are going to keep CO2 emissions climbing, with the US doing way more than its share and everyone else tagging along. Canada has, in effect, decided that the allure of tar sands wealth and a newly-opened arctic shore is too much to sacrifice. The fact that millions will die seems to be unmentionable in polite company. You would think that at the very least our own lives and treasure would be worth something. Play around with this map, which models sea-level rise at various heights, and tell me what you think about the idea of Vancouver Intl. Airport being underwater, with a 1m rise. Or all of Richmond, B.C. being underwater at 5m. Amusingly, Halifax and St. John's are relatively okay at 5m, but the flooding of the St. Lawrence leaves parts of Quebec City and Montreal scrambling. At 5m, the grounds of the Pentagon and Ronald Reagan airport in DC are both flooded. That's about the only saving grace in all of this -- rich, white America would know what it's like to rely on the levee-building skills of the Army Corps of Engineer for their safety and security.

Do I see any hope? Well, not today I don't. I keep up with new technologies, and the improving politics of climate change as much as anyone else (and more than most) but the report from Carbon Equity makes it clear that, in effect, the policy makers of the Earth are aiming for a plateau of CO2 concentrations at or even above 450 ppm, despite the clear evidence, outside of Carbon Equity's references, that this would be disastrous. And this "goal" of 450 ppm of CO2 is, like everything else we've done so far, basically a phony war: commitment in rhetoric only.

Carbon Equity's report ends with a number of ideas, most interestingly an individual carbon ration to make as rapid as possible a change to a carbon-negative society. It's not actually that radical, unless you've drank too much of the economist's kool-aid. Not only is rationing a natural response in a crisis (which I hope you can see we're in) but it has the benefit of being at least potentially sell-able. Cap-and-trade systems or a carbon tax are both going to raise costs that the poor and middle class will revolt against, but a ration could potentially be more equitable.

And if you think this is an unwarranted expansion of the power of the state in to our daily lives, all I can say is this: It wouldn't be necessary in the first place if we hadn't listened to small-government, anti-environmentalist types for the last 30 years. If we'd started this transition away from fossil fuels back then, it would have been easier and more painless on top of being early enough to avoid the current crisis. Now, we face the worst of both worlds: the massive expansion of state power to contain the crisis, and the possibility that it will still be too late to avoid the crisis.
Posted by john at 1:50 PM

Ever since the IPCC report came out, I've been shrieking "Adapt! Damn it!" for all the reasons you posit here.

Society is hell bent on driving the car into the wall. We have to prove beyond all doubt that climate change is here, and that we won't like the consequences.

The only consolation I have is that we won't be able to doubt our eyes much longer, and all the doubters will be proven wrong in my lifetime.

About Me
Email Me

"...forgive me jesting again, but the NDP is kind of proof that the Devil lives and interferes in the affairs of men." - Stephen Harper, 1997